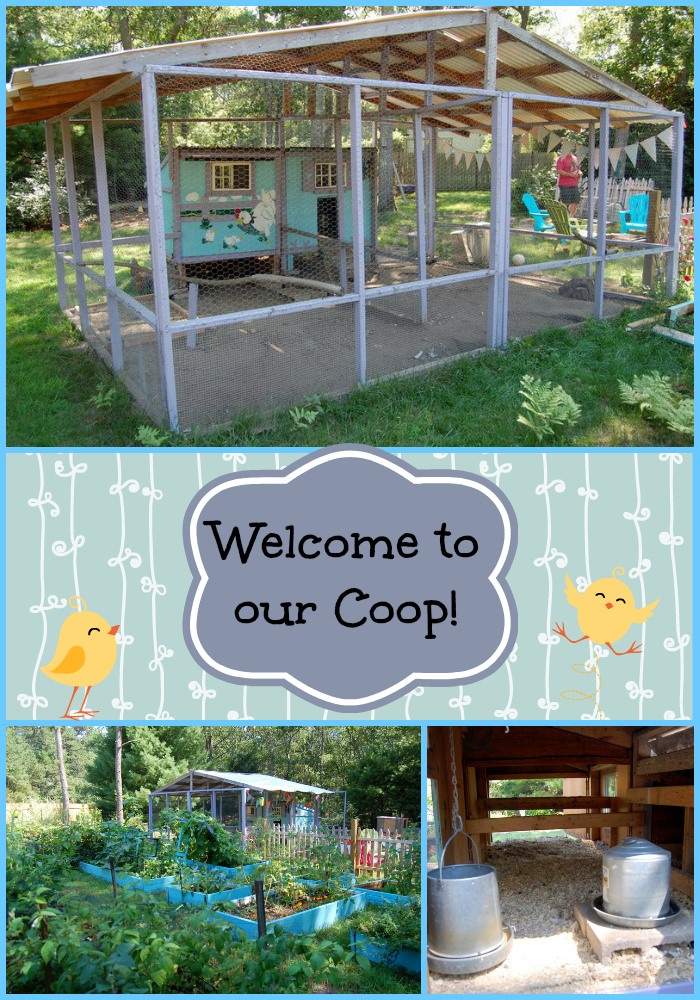 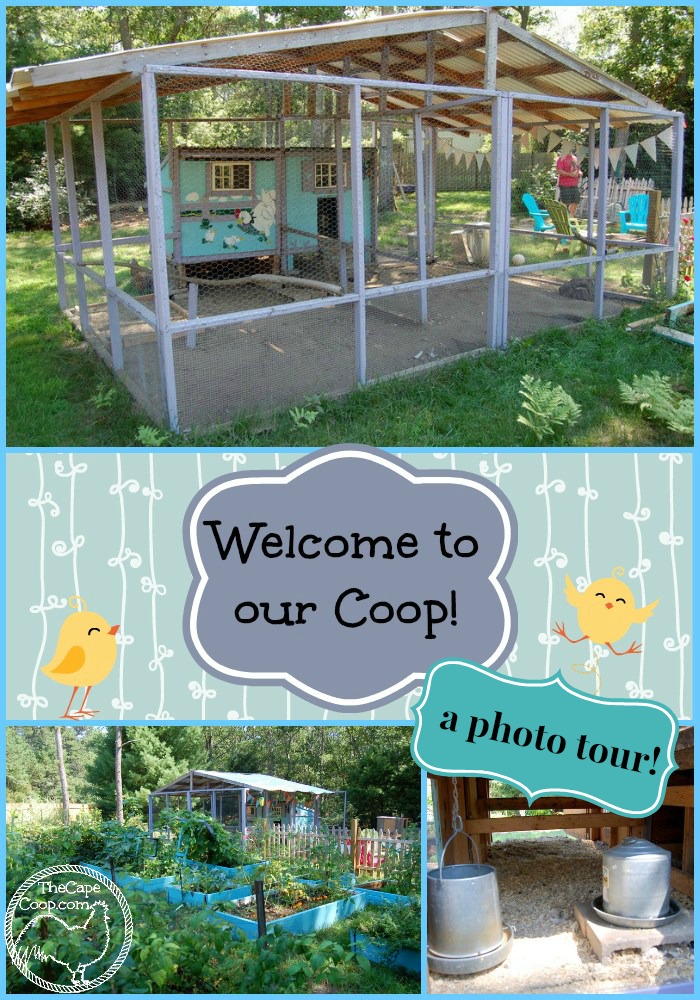 I LOVE checking out other people’s chicken set ups!  I enjoy seeing different solutions to problems we all face, seeing the creativity people have used in housing & caring for their flock, and getting new ideas for my coop of course.

My husband and I are not necessarily handy, having only moderate carpentry skills our coop is far from perfect.  But I hope you can find some inspiration here!

In 2012 when we first built our coop, we had only four hens.  We started with a basic 4×4 coop with external nest boxes, with an 8×11 run.  We had a large window in front & and long vent in the back for ventilation, as well as two circular vents on either side.  For the front window, we ordered a playhouse window that could open.  We installed it backwards so we could operate the latches from the outside without having to climb in the chicken house.  Both the left & right sides of the coop had huge access doors which made cleaning & caring for the chickens fast & easy. 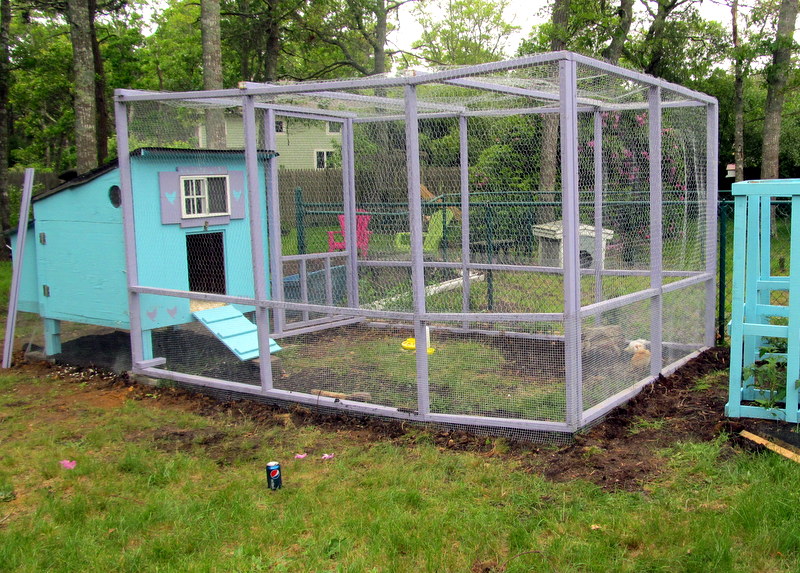 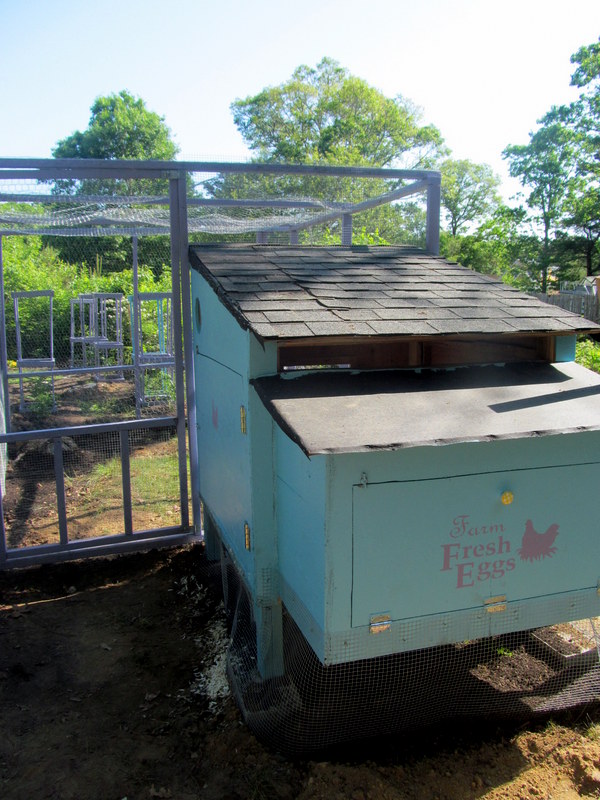 The coop had two huge nest boxes and 4ft of roost space.  The run was spacious for four birds and completely secure, it also offered a shady spot under the coop they could relax in.  We buried hardware cloth wire 18 inches down all the way around the run.  I can’t even tell you the amount of foiled attempts to get in run we have found over the years.  Especially in winter, we almost daily find holes where critters (mostly rodents) try to dig into the run but get stopped by the wire. click here to read more about keeping rodents out of your coop

Burying wire was not a fun job but it was 110% worth it!  The run is 6 feet tall so we could easily get in there for cleaning and visiting the girls.  The bottom 2 feet of the run walls are covered in hardware cloth and the top 4 feet is covered in chicken wire.  It was a good compromise providing predator security and keeping the cost down (I can’t believe how expensive wire is!).  The top of the run was covered in chicken wire to protect from hawks.  It was an awesome starter coop but as the hatchery catalogs came rolling in, we very quickly outgrew it!  After a year I knew it just wasn’t big enough, there are so many awesome chicken breeds how do you limit yourself to only four hens??? 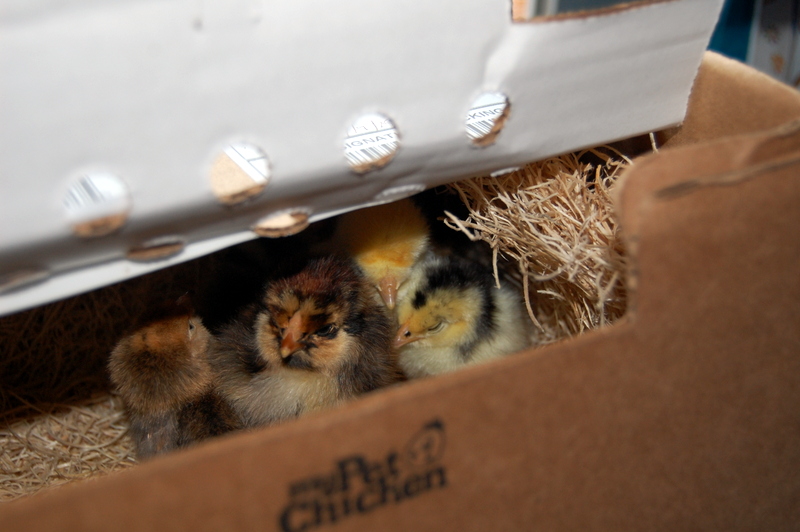 We had already invested so much money in this coop/run set up there was no way we were going to scrap it and start over just one year in.  We decided the chickens just needed a home addition!  We built a duplicate coop, the same 4×4 coop but without the nest box.  We connected the two coops and then did the same for the run. In place of the nest box in the back, the new coop has a large window to bring in light & ventilation.  For the new coop, we also relocated the long, horizontal vent.  On the old coop, it’s off the back, just over the nest boxes.  When we built the coop, we hadn’t realized that vent was also right next to the roosts.  The poor girls had chilly air blowing directly in at them all winter that year.  For the new coop, we put the vent on the front, at the highest point, where that warm, moist air could rise and escape.

We built another 8×11 run right next to the old one.  So now we had a 4×8 coop (plus nest boxes) and an 11×16 run (plus covered area under the coops).  We left the wall between the runs up except in one section.  It is handy to be able to just close up that section when we need to separate some chickens.  It also gave us a conveniently placed wall to support the roof in the middle. 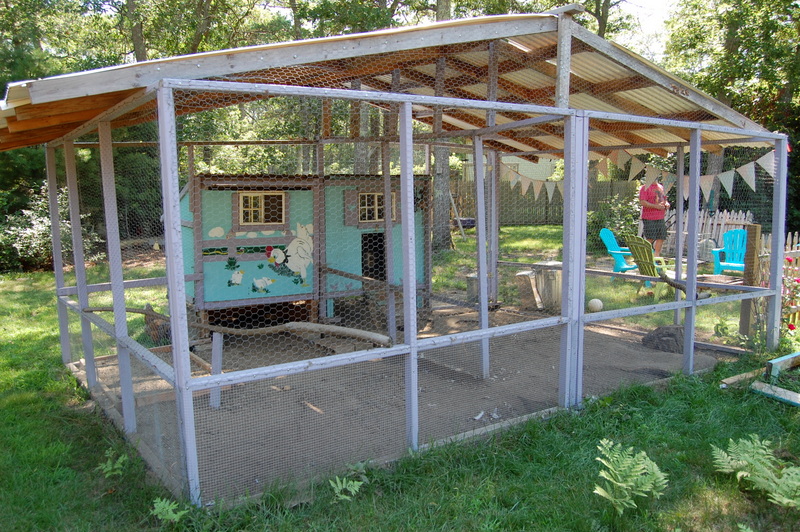 The chicken wire roof on the old run was good at keeping predators out, but it was awful in the winter.  The weight of the snow on the wire made it sag down.  It was so stretched out by spring I couldn’t stand straight in the run anymore.  So when we expanded, we opted to cover the entire run with solid, plastic roofing at an angle so the snow won’t pile up.  We let the roof extend out at the ends to provide us with a semi sheltered area to keep the feed cans.  The roosts in the run are just old branches that had fallen in our property, and now we had space to add a “sand box” for dust bathing.

We have cheap peel & stick tile floor inside, it’s super easy to keep clean and as they get damaged they are easy to pull up and replace a section without replacing the whole floor.  Now we use the old section of the coop to keep the feed & water, the nest boxes are there as well as an overflow roost.  The new section of the house is the “bedroom”, it is basically all roost space in there.  There is a large, south facing window in the back as well as a second, smaller window in the front.

Outside, the chickens have access underneath the coop to a shady, sheltered area.  They love to hang out under there in the winter to escape the snow, and in the summer to escape the heat and to hide from driving rain or wind.  The old coop section’s underside is just wire to let the breeze in, the new coop section’s underside still has the wire to keep out predators, but it also has wooden boards to keep out the wind & snow.  My daughter painted a fun chicken mural on the new section…just for fun. 🙂  And of course we painted the new coop the same bright blue to match the old coop and raised beds in the adjacent garden. 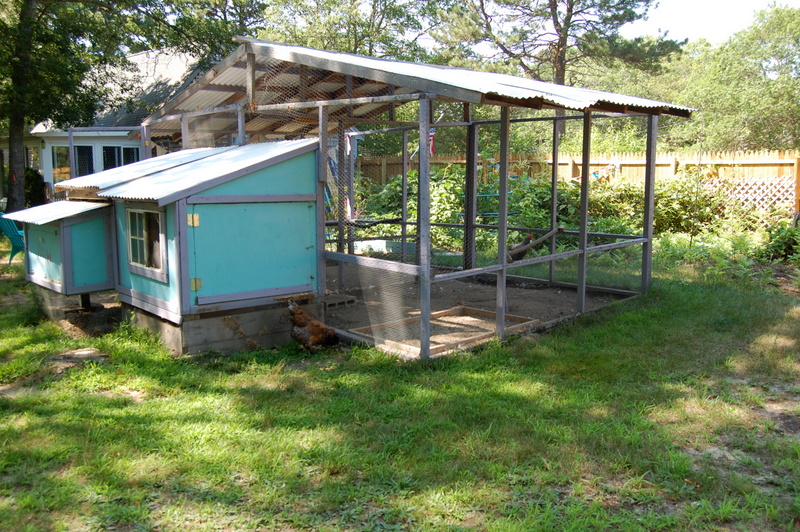 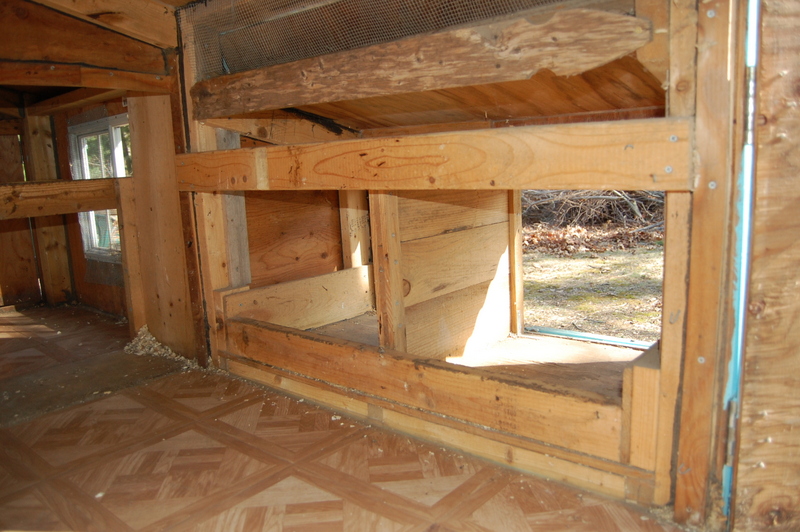 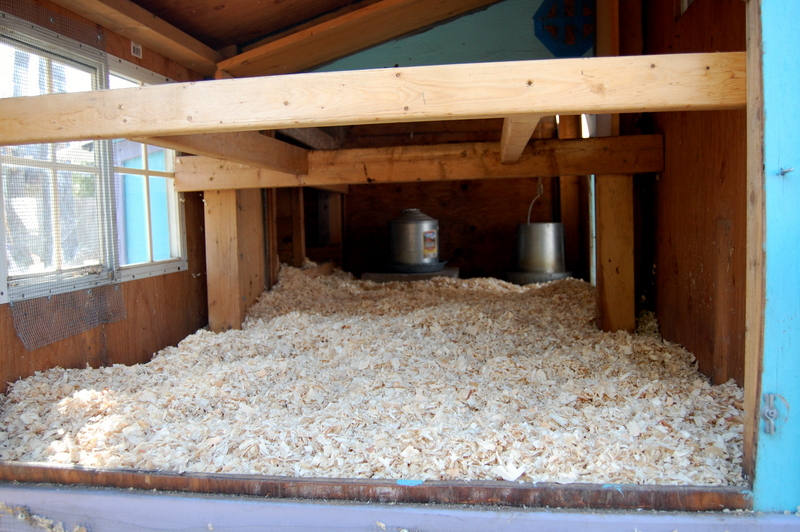 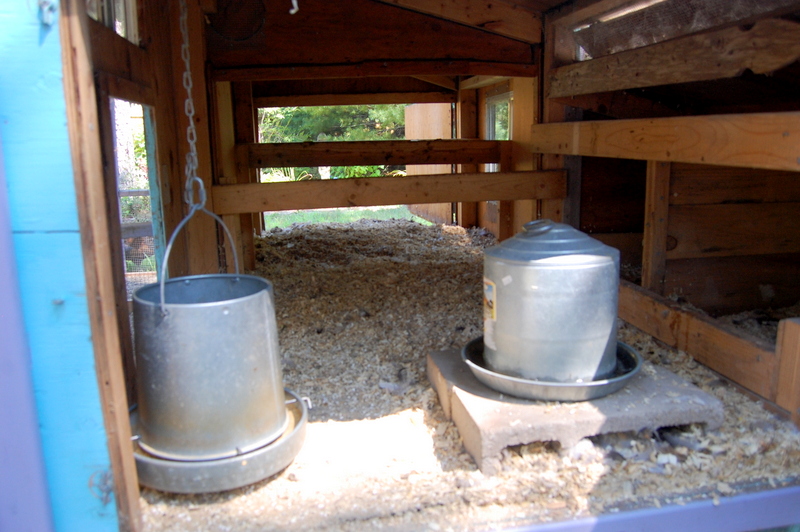 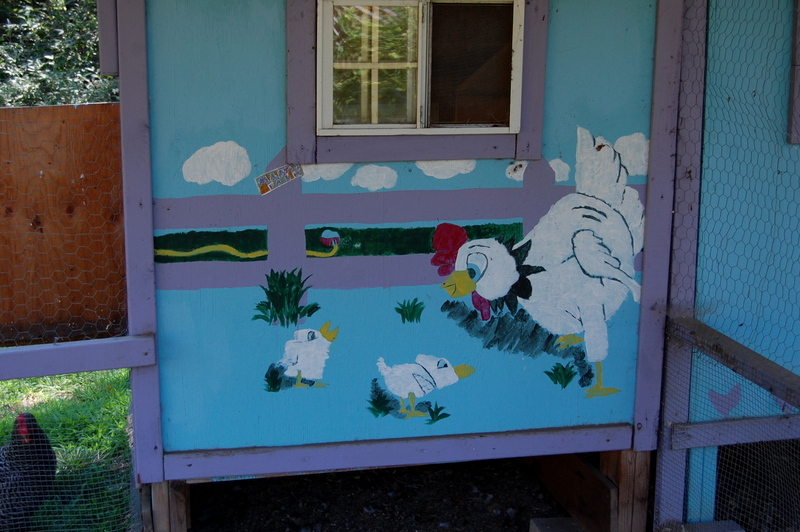 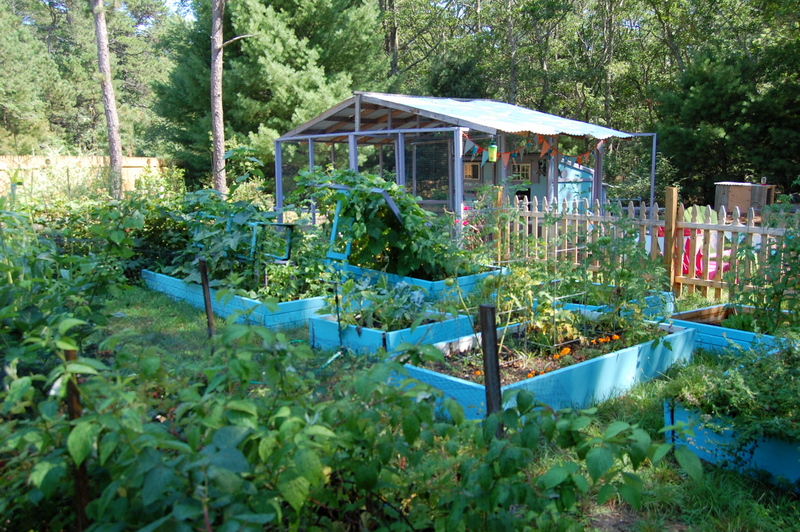 When we added ducks to our flock, we had our next big expansion with the addition of a little duck house and a bump out where their pool lives in the summer – we like to call it the duck lanai! 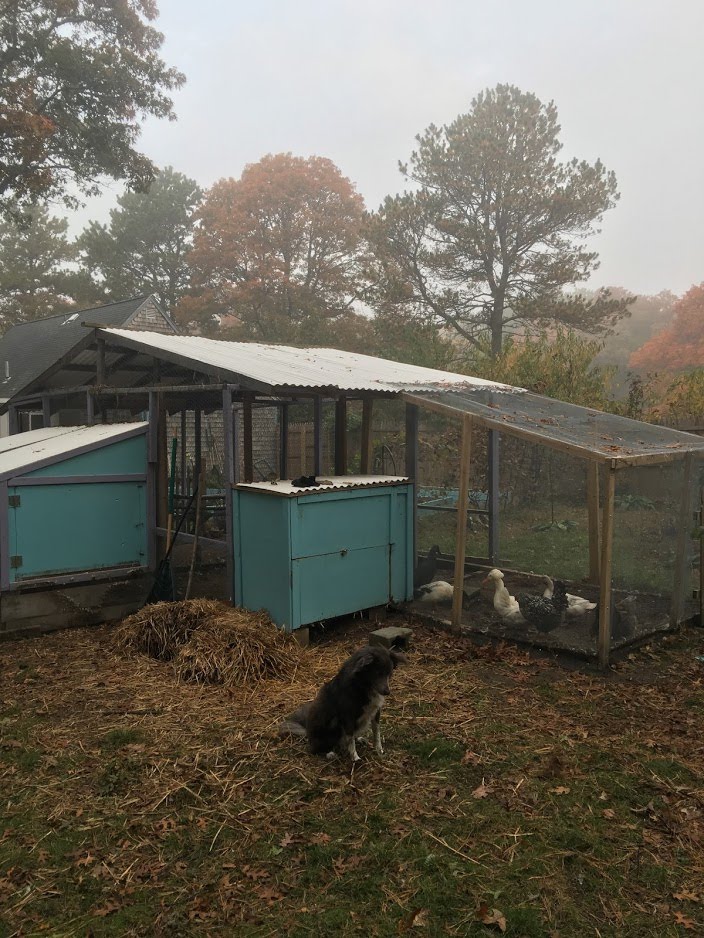 In 2020, we were blessed to be able to buy a small farm with large barn! So now we have LOTS of space to expand our chicken & duck family! Once we have the space all set up, I’ll add another post, but the “coop” space we are starting out with is a huge 10×30 space that was formerly 3 horse stalls with the partitions taken down. It’s been a fun adventure converting this barn to a great home for our birds! 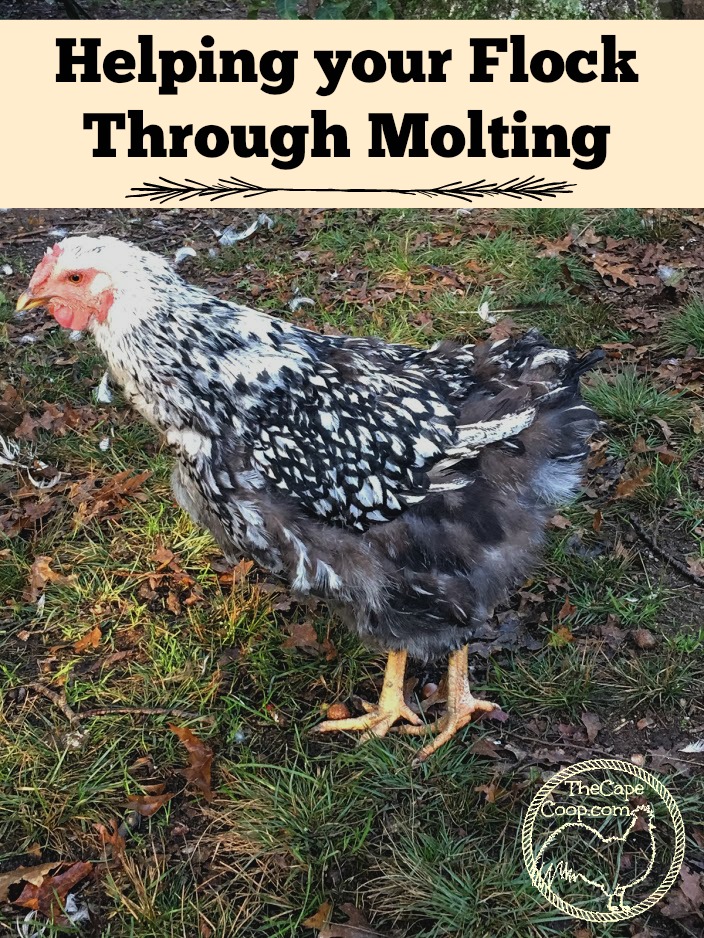 Helping your Flock Through Molting 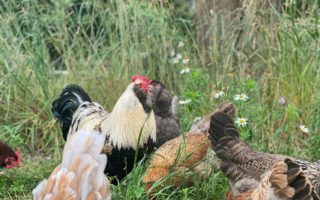