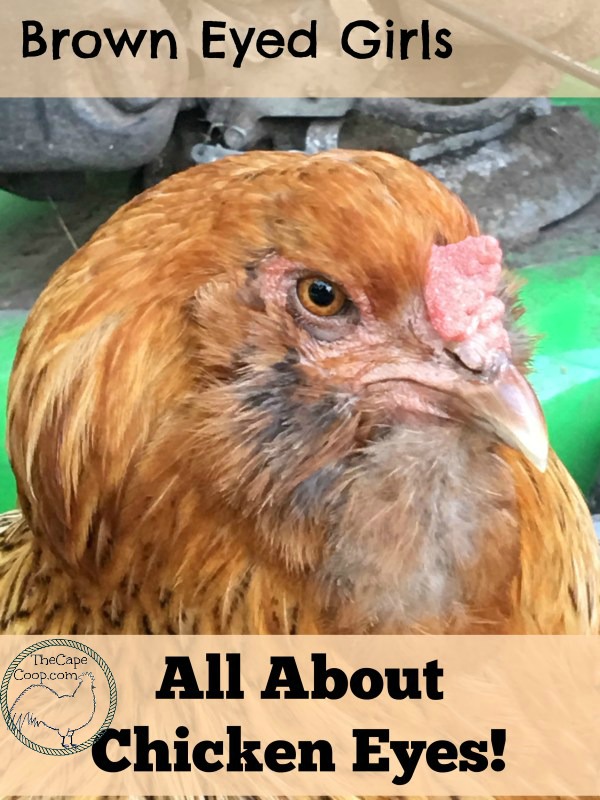 Chickens are fascinating creatures!  They have complex little social lives which is part of what makes them so fun to watch, but they also have some fascinating physical characteristics too.  Check out some of these interesting chicken eye facts!

When a hen is in her peak laying years it can wash out the colors from certain areas of her body – most notably legs, combs, wattles and even her eye color.  This condition is known as “Hen’s Eye”

Chickens see in a wider range of colors than humans.  Humans have three cones which allow us to see red, blue & green (with variations & combinations of these colors).  Chickens have a fourth cone that allows them to see ultra violet light and a fifth “double cone” that helps them sense motion.

A mother hen can use the UV cone to literally see which of her chicks are healthiest by seeing the UV light reflected in their growing feathers.  It is also believed they use this UV sight in selecting the healthiest, most colorful mate. Birds can find direction by looking at the sky, seeing the gradation of UV light, and “seeing” which way north is!  Their motion sight helps them detect the smallest movements of insects and the presence of predators lurking in the grass. 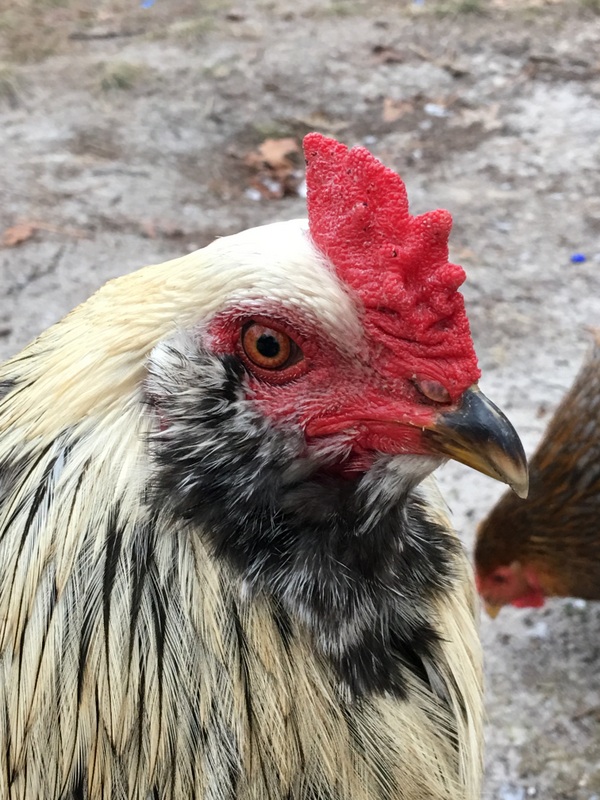 Because chicken eyes are so sensitive to light & motion, using artificial lighting can lead to grumpiness and bullying because the undetectable (to humans) flickering of a light bulb can drive them crazy.

In addition to upper & lower eyelids, chickens have a third eyelid called a nictitating eyelid that moves horizontally from front to back across the eye.  This third eyelid is transparent so they can see through it.  You can often see this eyelid when they are dust bathing, they want to be able to see, but want to keep dust out of their eyes.  This eyelid has ruined many an otherwise awesome chicken photo!  It causes the eye to look hazy in photos when closed (or partially closed)

Chickens have a pineal gland in their brains just under the skull that allows them to sense light even without seeing.  The gland regulates their reproductive cycle (so effects egg laying).  Their skull is thin enough the bright light can penetrate it and stimulate the gland.  Even a completely blind chicken can “see” if it is daylight.  This is why egg laying is so dependent on light – they need about 14-16 hours per day of light to stimulate the gland & lay an egg, so most times in short winter days egg production slows way down.

Birds (and many mammals) have a structure called a fovea in their retinas that acts as an image enlarger.  Chickens have two foveae, one is for distant vision, and one is for close up. The up close fovea is oval and sideways, and that’s why when you approach your chicken, they will often bob their heads and tilt their heads sideways to get the image of you into a clearer view. Chickens really can’t recognize flock members until they are within about 24 inches.

Chickens can not see in the dark.  Our retinas are made of rods & cones (cones help you see color, rods help you see at night).  Chickens have very few rods.  This is why they will go to roost about 30 minutes before dark, they know they need to find a safe place before the darkness sets in.  The reason behind this lies in their ancestors, the dinosaurs.  When dinosaurs roamed the earth most mammals became nocturnal for millions of years to survive, so they needed to see better in the dark.  Dinosaurs did not develop night vision so their evolutionary descendants (most bird species) have pretty poor night vision.

Is Free Ranging Right for your Flock?

Join us at the Fall @lovelivelocal fest TODAY! Sep

How am I suppose to work when my cutie little gran

I have fairs the next three weekends so I have bee

Surprise baby bunnies!!! When I went out to do far