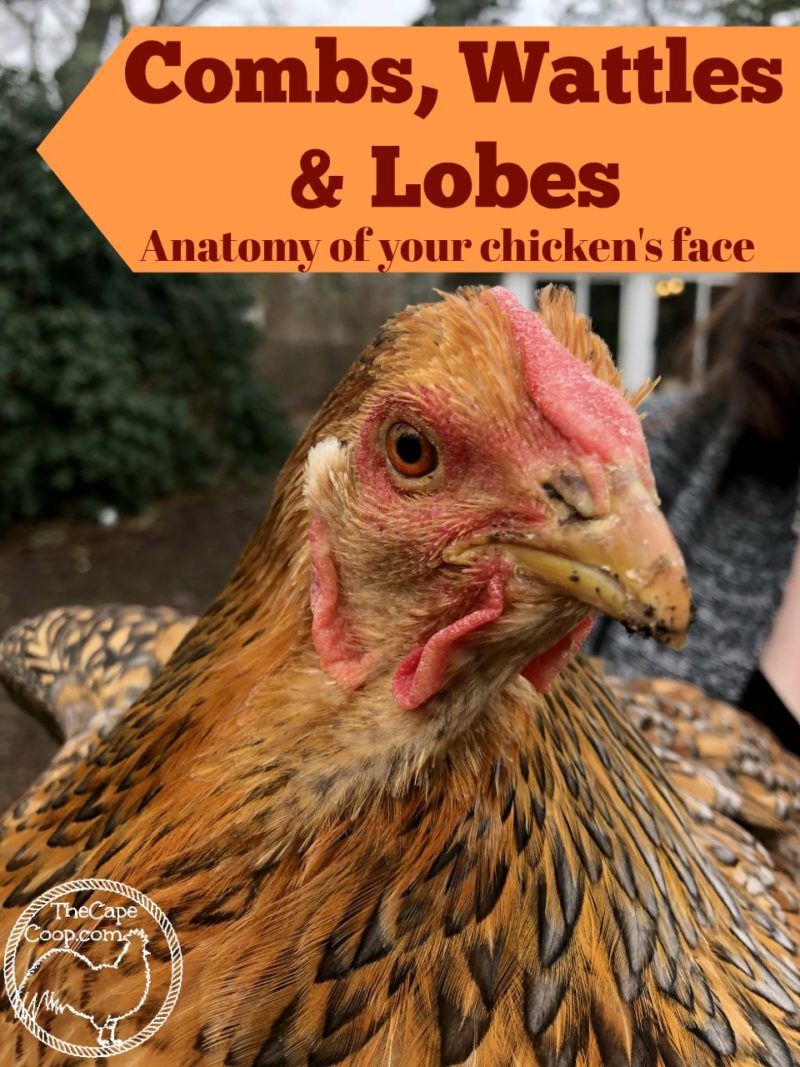 Combs, wattles & lobes – oh my!  What is up with all those fleshy bits on your chicken’s head? 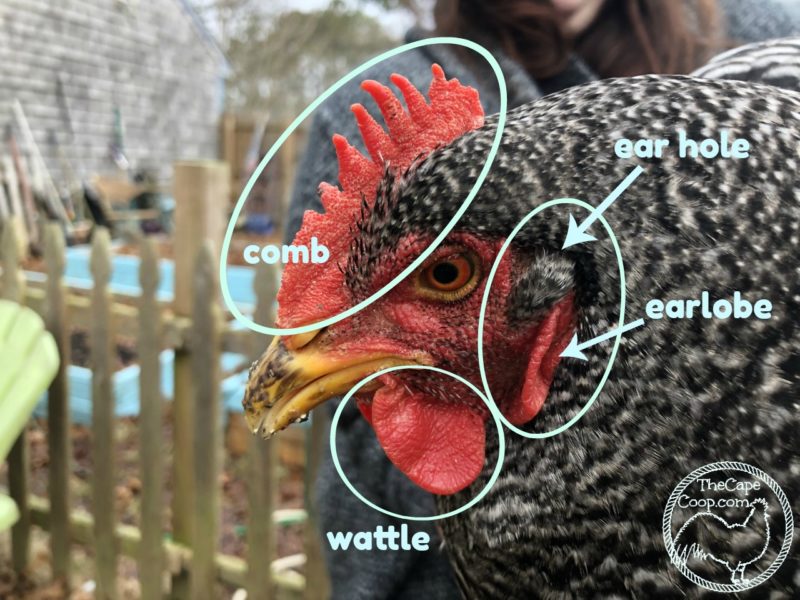 Can you hear me now?

Chickens ears can be really hard to find.  Just a small hole on either side of their head, and usually covered by feathers, they can be so hard to find some people think chickens don’t have ears!  Similar to a human, chickens do have an outer, middle & inner ear.

Slightly more prominent on their head are their earlobes.  Chicken earlobes come in four colors – red, white, black & blue.  Earlobe color is often related to egg color – but not always.  *Generally* chickens with white or blue earlobes lay white eggs and chickens with red earlobes lay brown eggs.   There are several breed exceptions.  Chickens that lay blue or green eggs usually have red earlobes, but not always.  Silkies usually lay brown eggs, but can have any colored earlobes.

Most chicken breeds have just a few small wrinkles of flesh for earlobes, but some breeds have very large earlobes that dangle down with their wattles!  They are easiest to see on dark colored chickens with white earlobes like Minorcas & Anconas.  Roosters usually have larger earlobes than hens in many breeds.

Both combs & wattles act as a natural air conditioning system.  Chickens don’t sweat like humans, but when blood circulates through their combs & wattles, the heat can easily transfer to the surrounding air, helping them cool off in warm weather.

Chickens that are well adapted to living in warm climates have much larger combs & wattles to help them combat the heat.  Chickens meant for cold climates generally have small combs & wattles.

Chicken combs are also a great way for you as their caretaker to assess their health.  Ideally, your chicken’s comb should be a nice bright red.  If their comb is pale, it can indicate a problem like anemia or a parasite infestation.  A bluish comb can mean your hen is cold and/or has poor circulation.  A white comb indicates areas where the comb has frostbite (these areas will eventually turn black and fall off).  Click here to read more about frostbite in chickens.  When a hen is molting and not laying eggs, her comb usually will be pale.  Likewise, when a pullet is young and not yet laying, her comb will be pale.

A nice, bright comb signals to males (and farmers who like eating eggs) that a hen is laying eggs & ready for mating.  For roosters, a large, bright red comb is flashy to attract hens and indicates he is virile & healthy. 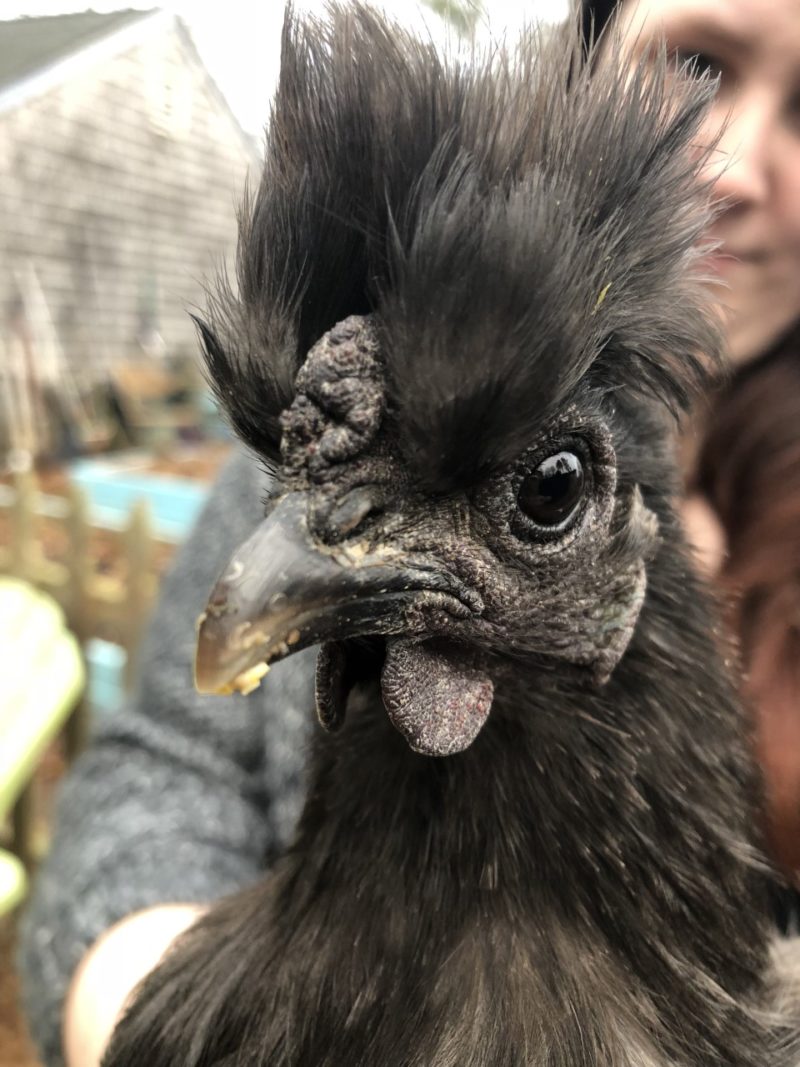 Combs come in all kinds of shapes & sizes and vary according to breed & even the individual chicken.  Check out some of the more common combs:

Single comb – One of the most common combs, and the one most people picture when they think of a chicken.  A single comb features a single row of spikes.  But that description can take on a huge variation from short & spiky on Orpingtons, to super tall spikes on Marans, to huge, floppy single combs on Leghorns.   In addition to Orpington, Maran & Leghorn, some of the many breeds with a single comb include Cochin, Plymouth Rock, Sussex, and Rhode Island Red.

Pea comb – One of the smallest combs, they have three small rows of ridges that look like peas in a pod.  Some breeds sporting a pea comb include Araucana, Brahma & Cornish.

Rose comb – A flat comb with no rows or spikes, it looks more like a mound.  Breeds with a rose comb include Dominique, Wyandotte, & Sebright.

Horn comb – An unusual looking comb that divides into two fleshy lines that look like the letter V or horns.  They can be either large or small.  Breeds with horn combs include Polish, Houdan, & Crevecoeur.

Walnut comb type – Encompasses a few types of combs that are irregular, knobby, and resemble the wrinkled outside of a walnut shell.  Some kinds of walnut combs include the cushion combs of Chanteclers, the strawberry combs of Malays, and the round lumpy Silkie comb found on Silkies.

6 Chicken Breeds Perfect for Cold Climates – and 2 that are not!

Dropping Board for Your Chicken Coop

Every evening for about half an hour just before s

Calendula is gorgeous this year and we got our fir

Excited for ArtsFalmouth fair this weekend! We wil

Anyone else just love soap bubbles or is it just m

Shearing day!! The boys are nice and cool in their

The babies are really starting to explore and get